This page contains all the news outputs from EARA, including press releases and videos, EARA policy and news briefings, plus opinion pieces and significant media articles.

Other pages in this section explain more about EARA on social media and practical information for journalists.

A study by the European Animal Research Association (EARA), of websites of biomedical research bodies in Germany, assessing how they discuss research using animals, has found that the sector is still some way from an acceptable level of openness and transparency in animal research. EARA assessed a total of 151 institutional websites in Germany during 2018, both public and private bodies, such as universities and pharmaceutical companies, and a rating system was developed to a
Bob Tolliday

Improving Openness and Animal Research in Germany – Free satellite event, Thursday, 12 July, FENS/EARA The list of speakers for the free satellite event at the FENS Forum of Neuroscience has now been confirmed. The event will discuss improving openness on animal research in communications with the general public, political decision makers and opinion formers in Germany. To attend please register here https://www.eventbrite.co.uk/e/improving-openness-and-animal-research-in-ge
Bob Tolliday

Improving Openness and Animal Research in Germany – Free satellite event, Thursday, 12 July, FENS/EARA The list of speakers for the free satellite event at the FENS Forum of Neuroscience has now been confirmed. The event will discuss improving openness on animal research in communications with the general public, political decision makers and opinion formers in Germany. To attend please register here https://www.eventbrite.co.uk/e/improving-openness-and-animal-research-in-ger
Bob Tolliday

Animal research – a debate between a primate researcher and an opponent

A moderated debate between Prof. Stefan Treue, (pictured below) animal physiologist, neuroscientist and director of the German Primate Center – Leibniz Institute for Primate Research in Göttingen and Jörg Luy, philosopher, veterinarian and animal ethicist at the Research and Advisory Institute for Applied Ethics and Animal Welfare Instet in Berlin. Thousands of monkeys are kept in Germany alone for animal experiments. Is that justifiable? Spiegel Moderation: Ann-Katrin Müller
Bob Tolliday

University of Munster launches Principles document on the ethical treatment of animals in testing.

The University of Münster, in Germany, has launched its Principles on the Ethical Treatment of Animals in Scientific Research and Teaching, as part of the institution’s approach to greater transparency on the issue of animal research. Part of this initiative has been to invite journalists to visit the university’s European Institute for Molecular Imaging (EIMI) and the Central Institute for Animal Experiments (ZTE), which houses rats, pigs, zebra fish and 14 white rabbits for
Bob Tolliday

The Max Delbrück Center (MDC), an EARA member, welcomed German Chancellor Angela Merkel as she opened its new research building in Berlin. The building hosts the Berlin Institute for Molecular Systems Biology (BIMSB), as a second MDC campus, committed to research excellence and openness. It is anticipated that it will host 250 researchers and 16 labs in the near future (see video of the opening). Setting the scene for different scientific disciplines – biotechnology, computat
Bob Tolliday

A leading brain scientist has made a passionate argument for basic research at a packed event, hosted by EARA, in Frankfurt am Main, Germany, this week (17 December 2018). Prof. Dr. Gilles Laurent, the Director of the Max Planck Institute for Brain Research (MPI), said: “I do research to find out how the brain works. It’s part of human activity and curiosity and it’s a motivation to conduct science that I believe holds on its own.” Reflecting on his own work with reptiles, ro
Bob Tolliday

A full list of speakers is now available for the next in a series of science communications events to be held at the Max Planck Institute for Brain Research, in Frankfurt am Main, on 17 December.. The free event (register here) will discuss improving openness and communications with the general public, political decision makers and opinion formers. Hosted by EARA and supported by the Federation of European Neuroscience Societies (FENS) and the Society for Neuroscience, the ev 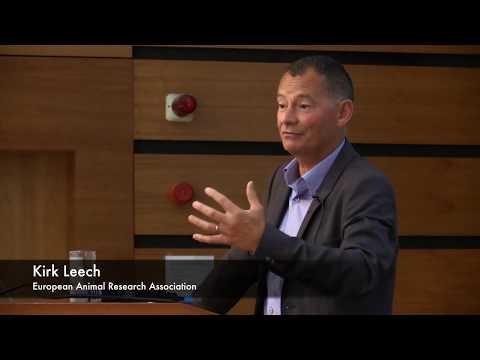 Improving openness in animal research in Germany – watch the videos

The Federation of European Neuroscience Societies (FENS) together with the Society for Neuroscience (SfN), last year kindly agreed to support an initiative by the European Animal Research Association (EARA) to raise awareness on the need for greater openness and transparency in communication about the use of animals in research among the neuroscience community in Germany. The first of three events entitled Improving Openness in Animal Research in Germany, was held at the Max
Bob Tolliday

Speakers have been announced for this year’s first EARA German event on openness in animal research. Supported by the Federation of European Neuroscience Societies (FENS) and the Society for Neuroscience, the event (register here) is entitled, Improving Openness in Animal Research in Germany The event, in Plön, will focus on why scientists, researchers, press officers and other stakeholders should talk about animal research, but it will not be a debate about the ethics of ani
Bob Tolliday

Germany statistics on 2017 animal use released

The total number of animals used in research in 2017 in Germany was 2.8 million, a similar level to 2015 and 2016, the latest figures reveal. Germany is second only to the UK in its use of animals – in 2014, the total used was 3.3 million. The figures, sent to the European Commission, show the vast majority of animals involved in the tests were rodents – 1.37 million mice and 255,000 rats. Among other figures provided by the Ministry of Agriculture, 3,300 dogs and 718 cats we
Bob Tolliday

Germany’s Federal Ministry of Food and Agriculture (Bundesministerium für Ernährung und Landwirtschaft) has produced its 2016 annual statistics on animal research procedures for Germany. These statistics have seen some big changes from previous years and we will attempt to show comparisons according to the different methodologies used. Germany produces two sets of data as part of the Animal Protection Act. 7(2) – procedures on animals 4(3) – animals killed solely for tissues
Bob Tolliday

The case for proactive communications of animal statistics

Every year the United Kingdom’s Home Office (the UK ministerial department of internal affairs) publishes its statistics on animals used in scientific procedures. The statistics are announced at a press briefing at which journalists can question the numbers of animals used and researchers place them in their scientific context. Now a yearly opportunity to openly discuss the need for animals in research, these press briefings were first organised as a counterweight to a negati
Bob Tolliday

A world-renowned German biomedical research institution has responded strongly to criticism from an activist group that has targeted one of its researchers. Activist group Ärzte gegen Tierversuche (Doctors Against Animal Experiments) protested about the research of Prof. Gary Lewin and his team, at the Max Delbrück Center for Molecular Medicine (MDC), Berlin, describing it as ‘absurd’. MDC has now hit back with Martin Lohse, CEO of MDC, explaining that while criticism is part
Bob Tolliday

A leader column in The Times newspaper has called on governments across the world to require airlines to carry animals used for research. The newspaper was commenting on an article it ran on the formal complaint to the US Department of Transportation by the National Association for Biomedical Research (NABR), which has accused four airlines operating in the USA, of discrimination by refusing to carry animals for use in medical research when the same animals can be carried as
Bob Tolliday

Take responsibility and speak up on animal research in Germany, scientists are urged at EARA event

The German biomedical community has been urged at an EARA event in Berlin, to communicate more to the public, talk about values and explain why animal research is important, not just use ‘facts and figures’. A panel of experts from research, animal welfare and the science media came together to discuss the topic Improving Openness in Animal Research in Germany at the Max Delbrück Center, Berlin, (MDC) in an event supported by the Federation of European Neuroscience Societies
Bob Tolliday

The Max Planck Society (MPS) in Germany has published a White Paper in which it outlines key ethical issues surrounding the use of animals in basic research. The Senate of the MPS has adopted the white paper as a declaration of principle. The White Paper states why animal research is still a vital part of life sciences research, and explains the legal and ethical framework that regulates animal research at the Max Planck Society. Together with the 3Rs, these issues shape the
Bob Tolliday

Our peers at Pro-test Germany explain the mission of this recently launched advocacy organisation. Pro-Test Deutschland lends its voice to science. We supply information for everyone to help understand the role of animal experiments in research. By offering clarification on many scientific, ethical, legal, social, and psychological aspects of animal research, we provide a common platform to all those who wish to stand up for science. And above all, we say: Yes to research. Ye
1
2